The word ‘glass’ is an all encompassing name given to materials that can have significant variations in chemical and other properties, however, it is most commonly used to describe various forms of silica based transparent materials that are often quite fragile in nature such as spectacles, drinking vessels, vases, etc.

Aside from the chemical differences in many forms of glass, variations in process of manufacture contribute towards making glass a material that is somewhat wide in scope and inconsistent in make-up. Even glass of the same make-up and shape can vary in size due to thermal inconsistencies during the cooling process, therefore, unlike most other materials glass can be difficult to laser etch with a highly consistent effect. 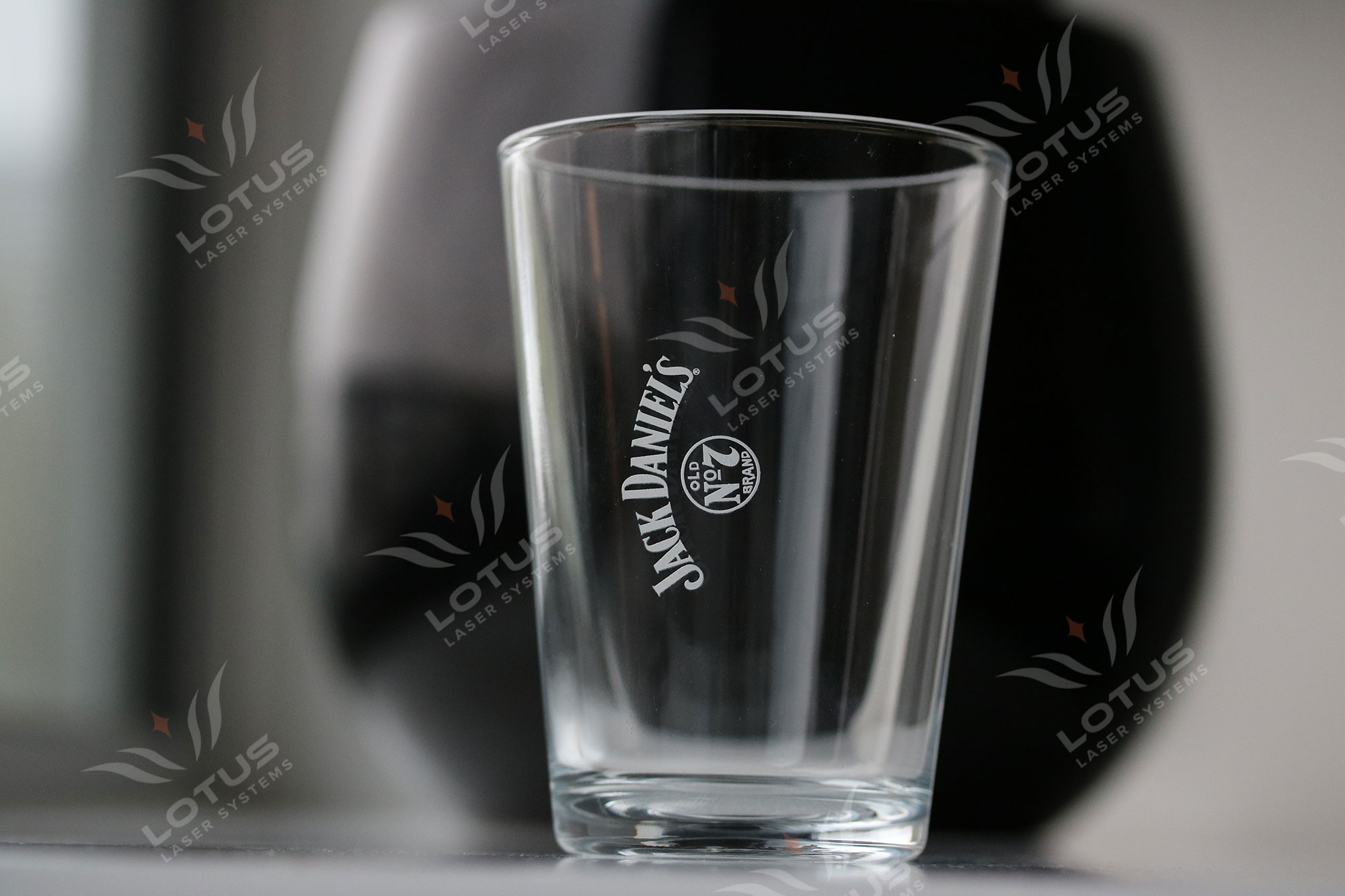 At Lotus Laser Systems we manufacture a UV marking machines ideally configured for laser engraving glass. Our experts would be happy to recommend which configuration best suits your application.

At shorter laser wavelengths glass is generally transparent, allowing the beam to pass through. For example, the lower layer of a 1µm f-theta lens found in a laser marking machine is made from glass. However, with a specially configured 532nm green laser it is possible to mark some forms of glass within the material itself to create some stunning effects

For surface laser marking glass the 10.6µm laser wavelength is most suitable.

When marked by laser glass will not vaporise. When exposed to a 10.6µm laser, glass thermally reacts and micro cracks are formed. During the laser marking process it’s very important not to thermally overload the material as the desired micro cracks will form into larger material fractures that will flake away from the main body of the material causing an undesirable effect. To minimise this risk, techniques like marking through wetted newspaper or marking through dish soap are often used where this surface applied additive acts as a heat-sink to minimise any thermal overload to the glass itself. Use of such additives can however significantly reduce throughput.

Aside from the laser wavelength the optical configuration of the laser engraving machine has the biggest influence on how glass appears after it is laser engraved. The focal point of a galvo laser can be as many as x5 the size of a typical plotter laser. Therefore, marking hatch filled designs is best performed by a plotter laser. When using a galvo laser the best results are created by only marking vector lines.

The plano convex lens of the plotter format laser engraving machine provides for the smallest possible focal point, as small as 90µm, which delivers a high energy density and a very localised thermal reaction the result of which is a mark closest to resembling that of chemical etching or sand blasting. This type of machine is best used for marking higher value items such as presentation awards, for example.

However, laser engraving glass with a plotter laser can be a very slow process, often taking minutes to produce.

For more industrial applications a galvo laser is often the only system that can be used because it will create a mark in mere seconds. Actually, for simple marking applications like laser marking wine glasses with volume fill lines a galvo laser can produce a mark well under a single second, so fast that the mark will appear after the laser has finished; much the same way that the sound of thunder can follow the flash of lightening.

Today, most plate glass for fenestration is marked by a 10.6µm galvo laser and whole new processes such a nucleation of beer glasses can only be produced with this type of laser marking machine because aside from the rapid marking speed a very long focal length is required for the laser to reach into the bottom of the glass.

At Lotus Laser Systems we manufacture a wide range of laser marking, laser engraving and laser cutting machines. Our experts would be happy to recommend which configuration best suits your application.

Watch our systems at work

Below are video examples of laser engraving glass.